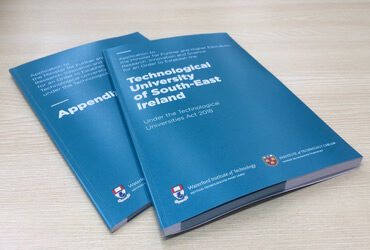 Minister for Further and Higher Education, Research, Innovation and Science, Simon Harris TD has announced IT Carlow and WIT will become a technological university in 2022.

At a meeting of the south east Oireachtas members, chairs and presidents, the Minister said that all parties were working toward the new technological university opening its doors by 1 May 2022. The new TU represents a positive milestone for the south east – the first university for the region.

Responding to the news Brian O’Farrell, CEO of County Carlow Chamber of Commerce said: “We are delighted following the announcement by Minister Harris in relation to the formation of the Technological University for the South East.  This is a significant and very welcome step forward in what has been a long process for the Institutes in Carlow and Waterford along with the many other stakeholders. The announcement today will have a big impact on the students due to graduate in 2022 and into the future from the new Technological University.

I would like to acknowledge the work of and thank the teams within both Institutes and the other stakeholders involved in the process that have made this step possible.  We look forward to continued engagement and continued development of the region and the new Technological University.”

COP26 – What was reached?
Scroll to top
Notice: Undefined variable: conn in /var/www/vhosts/carlowchamber.com/httpdocs/contentwp/plugins/cookie-script-com/cookie-script.php on line 245