The County Carlow Chamber have announced that Eimear Ní Bhraonáin will be recognised for her contributions to Carlow through being awarded the Carlow Ambassador Award at the upcoming Carlow Business Awards.

Eimear is well known across Carlow, the southeast and indeed further afield.  She is a communications expert with over 20 years of experience in the media industry, starting out in the regional press before moving to the national scene where she worked as the midlands and later south-east correspondent with Independent newspapers. Eimear is perhaps best known for moving to Moneygall in 2011 where she became the only “resident journalist” to cover the historic visit of US President Barack Obama to his ancestral home. She penned a souvenir book on the visit which was published on July 4th 2011. These days, Eimear presents the mid-morning talk show on local radio, KCLR Live, where she has the highest listenership across the station and of the wider national competitor set.

In addition to her day job on KCLR, Eimear’s passion for Carlow, its people, places, and everything to do with the county is worn proudly on her sleeve for all to see, where she connects and showcases all on offer to the wider audience.

Brian O’Farrell, CEO of County Carlow Chamber said “the judge’s decision of awarding Eimear Ní Bhraonáin the Carlow Ambassador Award is welcome and well deserved. Eimear is a consummate professional and a very well-respected voice on all topics both on her daily radio show but also outside of the airwaves.  Even in her personal time, Eimear is a strong advocate for the county and the wider area, representing and showcasing all on offer to the world.”

On being informed that she has been selected as the Carlow Ambassador, Eimear commented “Táim fíor bhródúil as mo cheantar agus na deiseanna ar fad a thug Ceatharlach dom.

I’m honoured and humbled to receive the award as there are so many great people who promote our little county.

I’ve been incredibly fortunate to be able to live, work and raise my family in my native Carlow, and there’s nowhere else I’d rather be.”

The Ambassador of the Year Award will be presented to Eimear Ní Bhraonáin at the Carlow Business Awards on Thursday 29th September. 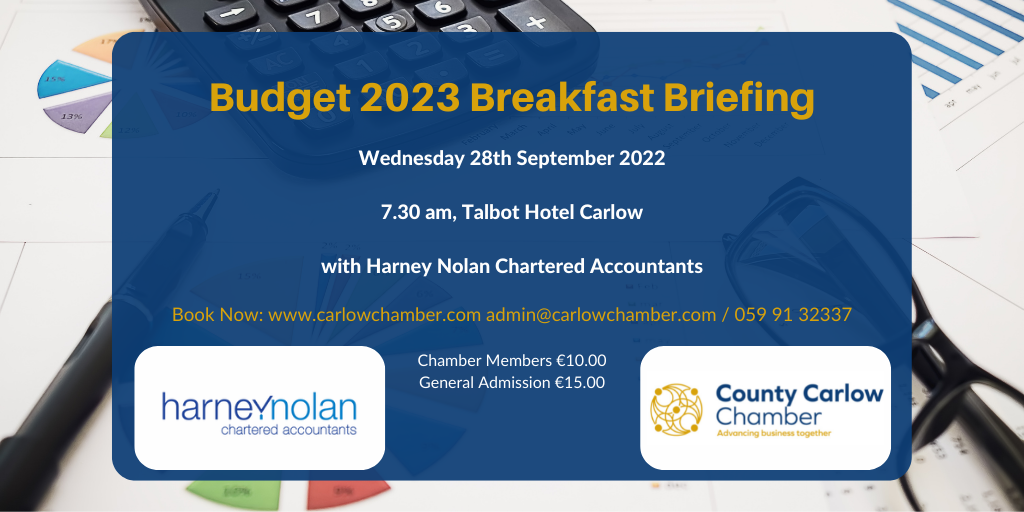 The Carlow Business Awards 2022 will recognise James Kehoe with the Lifetime...
Scroll to top
Notice: Undefined variable: conn in /var/www/vhosts/carlowchamber.com/httpdocs/contentwp/plugins/cookie-script-com/cookie-script.php on line 245