On Thursday 19th December, His Excellency Mr Adriaan Palm, Ambassador at The Netherlands Embassy arrived in Carlow to further strengthen relations with local companies. Accompanied on the day by Ms. Wemmechien Hofman, Senior Economic & Trade Officer and Ms Ciara Mc Govern who has responsibility for Political and EU Affairs, the delegation carried out a number of visits in Carlow before attending a reception with some of the companies from the recent trade mission to the Netherlands.

The day opened with the Ambassador calling to meet with students in Rathoe National School, where he spoke to them about the Netherlands and the EU. The Blue Star Programme is an educational initiative for primary school students across Ireland and Ambassador Palm is a strong advocate for the programme. 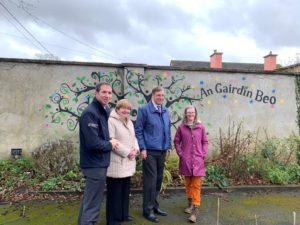 On his arrival to Carlow town, Ambassador Palm was welcomed to An Gairdin Beo where he received a tour of the two acre community garden hearing about the ethos and values of the space and how it serves the community of Carlow. He was very interested to hear of the work that is carried out there, especially in relation to diversity, sustainability and the organic methods that are being applied. On conclusion of a tour of the garden, the delegation retired to the Community Hall for refreshments and more in-depth discussions on the space.

Next on the schedule was a visit to Thermoair where the Ambassador met with Niall Browne and some of the team members at the Dutch owned facility. Thermoair was established here in 1980 by the late Mr Dick Honig following an unscheduled stopover in the town, and to this day it continues to be a key part of the family’s business. Niall Browne and the team at Thermo Air, conducted a tour of the premises, showcasing some of the major projects under development by the team who specialise in the design and manufacture of bespoke Air Handling Units and innovative air movement solutions. 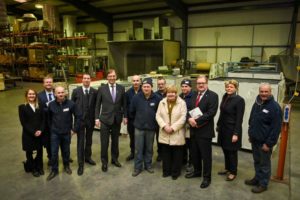 The delegation then headed for The Seven Oaks Hotel, where a reception was being hosted in partnership with the Carlow Local Enterprise Office for the Ambassador to meet representatives from some of the Carlow companies who travelled to the Netherlands in November as part of trade prospecting mission. Cllr John Pender the Caithoirleach of Co. Carlow was on hand to welcome the Ambassador, and during the reception he spoke to the importance of strong relationships and building on the opportunities for trade.

Brian O’Farrell, CEO of the Chamber discussed the great relationship that has been developed over the years between Carlow and the Embassy of the Netherlands in Ireland, and how we look forward to building on this further. He thanked the Ambassador and his team for the support that was provided to the companies on the recent trade mission and noted that the feedback had been very positive across all the participants. 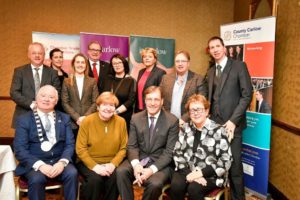 The November trade mission saw several Carlow companies heading over to the Netherlands where a series of bespoke meetings had been scheduled for them, with a view to creating new partnerships for trade and collaboration. Mick Kelly of Simply Workflow was one of the participants and he spoke to the very positive meetings that they had with companies and agencies in the Netherlands. They are working to build on these relationships and found the trip very valuable and positive. The Ambassador reminded the companies that the Embassy would be there to assist where possible as they work to develop into the market and as both counties work on the challenges ahead including Brexit.

Eileen Brophy presented the Ambassador with a personalised bottle of The Irishman, from Walsh Whiskey to commemorate his visit to Carlow and noted how we look forward to welcoming him back again very soon. 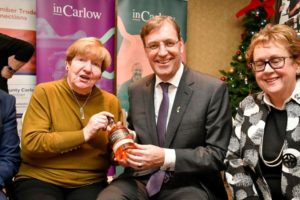 Trade Opportunities with the UAE for companies across Carlow and Kilkenny explored...