On Tuesday 26th November, H.E. Sultan Al Ali, Ambassador at UAE Embassy arrived to explore current and future links for trade and collaboration between companies in Carlow and Kilkenny. The visit formed part of Chamber Trade Connections, a series launched by the County Carlow Chamber aimed at meeting with representatives from existing and new markets to assist in growing the trade links for Chamber Members and companies in the region. The focus of this visit was different from some of the previously organised ones in that it was organised by both the County Carlow Chamber and Kilkenny Chamber, working to highlight companies and opportunities across both Counties. 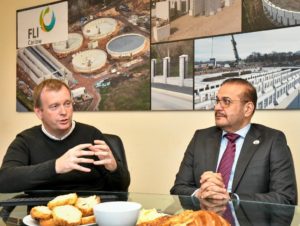 The first stop on the day was to FLI Carlow based just outside Ballon, where the Ambassador met with Tom Dunne, Managing Dorector. The company provides design, engineering and manufacturing services for the off-site manufacture of specialist concrete infrastructure and attenuation systems with particular focus on Water, Wastewater, Energy and Storm Attenuation in the UK & Ireland with bespoke projects globally. The visit opened with an overview of the company, highlighting the value proposition and the work that they carry out, before the Ambassador went for a tour of the facility to experience firsthand the work carried out on site.

Next on the schedule was a visit to Delmec Engineering in Carlow, where the Ambassador was welcomed by John Kennedy, General Manager with Patrick O’Brien and Aine Kenna. Delmec is an award-winning company who specialise in telecoms infrastructure design, supply, construction and management. On arrival the Ambassador received a presentation which provided an insight into the expertise of the team at Delmec and the work they are doing globally, before highlighting some key aspects where they could being benefit to partners in the UAE. Asd the afternoon progressed, the Ambassador met with the wider team and also visited the workshops where the infrastructure is manufactured. 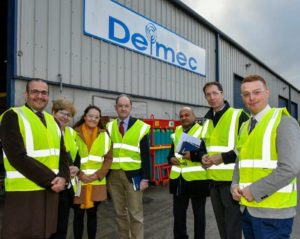 The delegation then headed for Goresbridge where they called into Connolly’s RED MILLS to meet with Michael Connolly and Bill Connolly who provided an insight into the company including its history right through to the current day under the leadership of the 4th and 5th generations of the Connolly family. On a tour of the facility in Goresbridge, the Ambassador was shown how the company ensure the highest quality in everything they do and work to reduce the risk factors in equine nutrition, through the systems in their state-of-the-art quality assurance onsite laboratory. Innovation is at the heart of the company and they have led the way in European horse nutrition, blending the old wisdom of Irish and British Horsemanship with the latest in research and development in the science of optimal horse feeding.

The delegation then moved onwards to Kilkenny, calling firstly to the Connolly’s RED MILLS facility in PurcellsInch Industrial Estate which focuses on several specific areas including the development and production of pet treats. The site is also undergoing a programme of investment with the addition of additional facilities for the testing and development of specific products.

The final stop of the day saw the Ambassador arrive at the Connolly’s RED MILLS Retail Outlet at Cillin Hill Kilkenny. The ethos of the company not to sit still, but to continue growing was evident throughout the day and it also showed the Ambassador how the company focus on standards and quality at every stage from the raw materials right through to serving their customers. 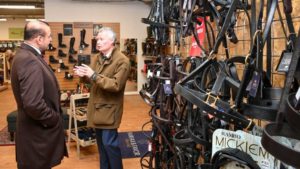 The day was concluded with a reception for members of the County Carlow and Kilkenny chambers and invited guests, affording them an opportunity to meet with the Ambassador and discuss the opportunities for trade and collaboration.
Brian O’Farrell, CEO of County Carlow Chamber opened with reception highlighting the focus of Chambers in working together in promoting the region, showcasing some of the many great companies in the South East, and while the Ambassador only managed to visit a snapshot of what is on offer, we look forward to developing further opportunities.

Speaking about their experience from working with companies in the UAE Michael Connolly, gave some insight into the work of Connolly’s RED MILLS and indeed their plans. He stressed the important to the company of ensuring the highest standards in everything they do and how this has helped them to build so many vital relationships, where people trust the brand and products of Connolly’s RED MILLS. 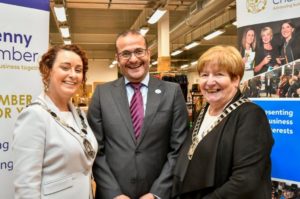 The Ambassador spoke about his delight at being invited to visit Carlow and Kilkenny and what he had learned and experienced during the day visiting companies in a variety of sectors. He highlighted the importance of building relationships and reminded everyone present that the doors of the UAE Embassy are open and ready to assist them.

Marion Acreman, President of Kilkenny Chamber spoke of the importance of building and developing relationships and how companies in the region look forward to working closer with the Ambassador and his team where opportunities arise. She continued by highlighting the work in the region to showcase the South East of Ireland, especially through the Ireland South East Development Office, which is supported by various agencies, the Chambers in the region and led by the local authorities. The South East has so much to offer and we know that working together we can achieve so much more. 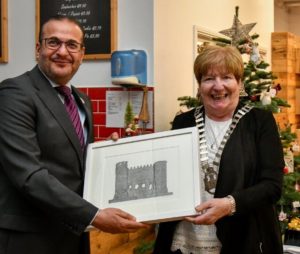 The evening was closed by Eileen Brophy, President of County Carlow Chamber who presented a print of Carlow Castle by local artist Corina Fitzgibbon. Carlow Castle, now a ruin stands on the eastern bank of the River Barrow. It is thought to have been built by William de Marshal, Earl of Pembroke and Lord of Leinster between 1207 and 1213.

Ambassador Adriaan Palm of the Embassy of the Netherlands in Ireland, visited...
Scroll to top
Notice: Undefined variable: conn in /var/www/vhosts/carlowchamber.com/httpdocs/contentwp/plugins/cookie-script-com/cookie-script.php on line 245