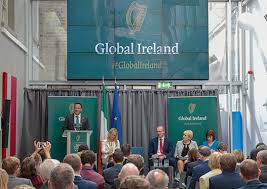 “We welcome today’s launch of the Global Ireland 2025 plans and the scale of the ambitions they aim to achieve over the coming years.

Chambers Ireland has previously called for various initiatives to safeguard and develop further Ireland’s international trade and diplomatic networks in the wake of Brexit and other international developments, from further investment to our embassies and state agencies abroad to our national bodies for supporting Irish businesses participating in global enterprise.

The Global Ireland 2025 announcements aim to accomplish these initiatives which will ideally support the diversification of our exports and inward investment to compensate for, and mitigate against, any trade challenges which lie ahead.

We look forward to seeing Ireland’s Global Footprint manifest in the years to come.”

The Global Ireland 2025 Vision is the Government’s initiative to double the scope and impact of Ireland’s global footprint in the period to 2025.  Being billed as the most ambitious renewal and expansion of Ireland’s international presence ever undertaken in terms of diplomacy, culture, business, overseas aid, tourism and trade.  The Government has already announced new Embassies in Chile, Colombia, New Zealand and Jordan, and new Consulates in Vancouver and Mumbai.

With the formal launch of Global Ireland 2025, the Government will implement a range of further measures, including:

Brian O’Farrell, CEO of County Carlow Chamber who welcomed the launch commented “This will help to strengthen Ireland further in global markets and we need to ensure that our businesses have the necessary supports to help them grow and diversify into these export markets especially as Brexit moves ever closer.”