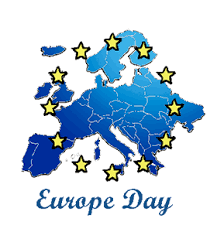 “Europe Day is a celebration of the peace, unity and freedoms which Ireland shares and enjoys with its fellow member states of the European Union.

Today’s anniversary of the 1950 ‘Schuman Declaration’, which proposed a vision for a new geopolitical union across Europe, is a timely reminder of the importance of the European Union and the resounding benefits that EU membership has brought and continues to bring to Ireland.

Since we joined the EU in 1973, Ireland has been a net recipient of more than €44 billion in EU funds. This year Ireland claims the accolade of the fastest growing economy in the EU for the fourth year in a row. This is remarkable when you take into account not just the impact of the economic crash on Irish society, but also how far we’ve come since we joined the EU, being transformed from the poorest economy within the bloc, to currently the fastest growing and one of the wealthiest.

According to CSO figures, since accession to membership in 1973, Ireland has more than doubled its work force, with just over one million in employment at the time of joining, which has now jumped to over two million.

Furthermore, Ireland’s GDP has soared from roughly €37 billion (Euro equivalent) since joining what was formerly known as the European Economic Community in 1973 to almost €300 billion today, a growth of 690%. This is in dramatic contrast to the 118% growth of GDP over the 45 years prior to membership. Gender parity in the workforce has also risen dramatically since the beginning of our membership, as female representation in Ireland’s workforce has risen from 27% in 1973 to 45% today.

We also note the results of yesterday’s European Movement Ireland’s poll, which shows that over 90% of Irish citizens are in favour of Ireland’s continued membership of the EU.

We welcome these results as an indication of the ongoing support the Irish public has for the European project. This is particularly important given the developing public debate concerning the future of Europe. The Irish Chamber network has in the past voiced its unequivocal support for membership of the EU.

With 90% of global growth expected to take place outside of the EU by 2020, the future direction of the EU must be one that continues to support and facilitate free trade, improved competitiveness and innovation.”

More than 6,000 County Carlow commuters to be surveyed in job creation driv...