With the deadline date looming for submissions to the Regional Spatial Economic Strategy, a number of key players from the Chambers of Commerce within the South East Region met in Kilkenny City on Wednesday, January 23rd.
Past and Current CEOs and Presidents of regional chambers discussed some of the primary issues that are important for the region such as housing, Brexit, attracting and retaining talent, FDI, upgrading N24 to Motorway standard, TUSE, 24/7 cardiac cath lab at UHW and much more.
The South East Region Chamber promotes a culture of joined up thinking for economic development in the region and this was the first coming together of like-minded business leaders in 2019.
Business owners from across Kilkenny and the South East are being encouraged to engage with their local Chambers to ensure their views are factored in to the future plans for the region.
As well as being CEO of Kilkenny Chamber of Commerce, John Hurley is also Chairperson of the South East Region Chamber and he explains the significance of the meeting, “Kilkenny Chamber has been representing the interests of businesses based in the City and County of Kilkenny since 1948. However many influences on business in Kilkenny come from outside the County and it is important to have robust representation in this wider context.”
“It is essential to have an understanding of the wider regional perspective of business influencers and to proactively engage in that space. Kilkenny Chamber is to the fore in its engagement with the authorities and decision makers on a wide range of regional and national issues.”
Marion Acreman, President of Kilkenny Chamber said “The collective power of the SE Chambers in lobbying our political representatives and government agencies is potentially very powerful and something that can be pursued though positive collaboration between all the Chambers in the SE region.” 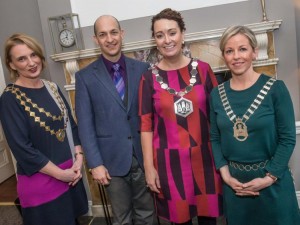