On Thursday 27th June, Her Excellency Mrs Deike Potzel, Ambassador at The German Embassy arrived in Carlow to explore current and future links for trade and collaboration between companies in Carlow and Germany. Accompanied on the day by Mr Ralf Lissek of the German Irish Chamber of Commerce, the delegation spent the day visiting several companies in the county before speaking to members and guests at a reception later in the evening. The visit was organised by the County Carlow Chamber through its Chamber Trade Connections series which is aimed at meeting with representatives from existing and new markets to assist in growing the trade links for Chamber Members and companies across the county. 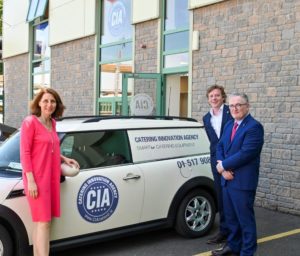 The first stop on the day was to meet with Seamus Marnane and the team at the Catering Innovation Agency, the Carlow company which is leading the way in the design, supply and installation of commercial kitchens across the country. The award-winning company work with a number of key suppliers in Germany and have built a reputation for value, reliability and quality.

Next on the schedule was a visit to Autolaunch in Bagenalstown, where the Ambassador met with Eddie Hickey and some members of the team before bringing her for a tour of the premises. The company established in 2003 has grown to employ 425 people and works with most of the leading car manufacturers in the world. 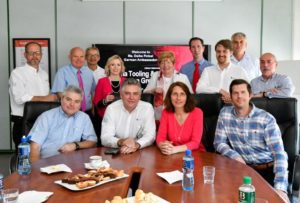 The delegation then headed for Tullow where they called into T.E Laboratories based in the Loughmartin Business Park. The company has grown over the last 28 years to become a multi-divisional SME, driven by a passion for chemistry and innovation. John McGrath, Sales Director welcomed the Ambassador, highlighting the work of the company before commencing on a tour of the state-of-the-art facilities, which houses four laboratories and a dedicated 11,000 s-ft R&D centre. The company which works with companies globally now employs over 50 people, the majority of whom are chemists, engineers or full-time researchers.

The final scheduled visit of the day was to Burnside Autocyl (Tullow) Ltd, where the delegation was welcomed by on arrival by the company founder Paddy Byrne and Caroline Kelly, Director of Sales. The team at Burnside provided an overview of the company, highlighting the growth and development over the last 45 years, that has seen them recognised as a leading manufacturer of custom hydraulic cylinders for all types of mobile applications. The delegation were brought on a tour of the factory floor to meet some of the team and learn first-hand about the co-operative team approach, highly flexible manufacturing system and the value added features that are core to the Burnside group. 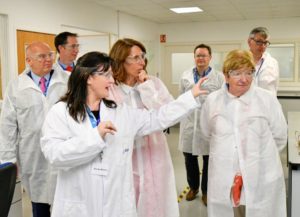 The day was concluded with a reception for members of the chamber and invited guests to meet with the Ambassador and Mr Lissek where discussions took place looking at the opportunities for trade and collaboration.

Brian O’Farrell, CEO of County Carlow Chamber opened with reception highlighting the strong trade links that currently exist between Ireland and Germany, and the need to ensure that these links and routes are not affected by Brexit. Based on export sales from 2017, Germany is Irelands 4th biggest trade partner with exports of over $11.3bn, and imports of over $7.73bn. 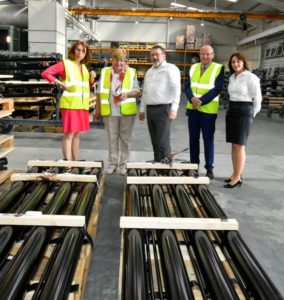 Speaking about their experience from working with companies in Germany, Caroline Kelly of Burnside Autocyl highlighted the importance of being there for your customers and personal contact along the journey. The first customer of Burnside in Germany continues to work with them to this day and that is testament to the quality of the partnership that has developed.

The Ambassador spoke about her delight at being invited to visit Carlow and what she had learned and experienced during the day visiting companies in Calrow. She spoke about the opportunities and challenges for Irish Companies doing Business in Germany and the importance of building a strong trading partnership in a post Brexit environment.

Mr Lissek, CEO of the German Irish Chamber of Commerce gave an overview of the current trading details between Ireland and Germany, moving on to discuss some of the supports that they can provide for local companies who are looking to develop trade partnerships in Germany. Companies who are members of the County Carlow Chamber are also now counted as members of the German Irish Chamber based on an agreement between the two bodies, providing access to a wider range of services for Carlow companies.

Eileen Brophy, President of County Carlow Chamber discussed the significance of maintaining and developing links between companies in Carlow and Germany, after which she presented Ambassador Potzel with a gift, an engraved cheese board from Ballyshane Studio and an Eco printed silk scarf which was especially produced for the Ambassador by Nicola Brown in South Carlow. 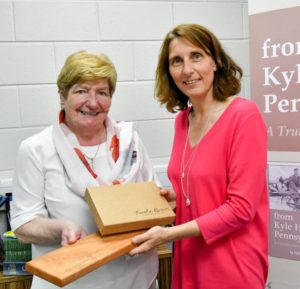 The evening was closed by Paddy Byrne, one of the founders of Burnside Group who presented Ambassador Potzel with a copy of his recently released book, “From Kyle Hill to Pennsylvania” which tells the story of the extraordinary development of a small company in rural Ireland, which grew to employ over 1000 people in County Carlow and now ranks in the top league of hydraulic cylinders makers in the world. 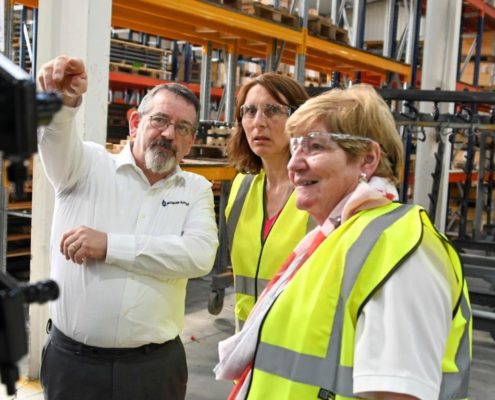 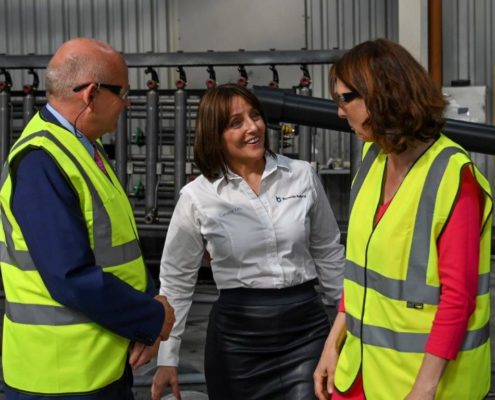 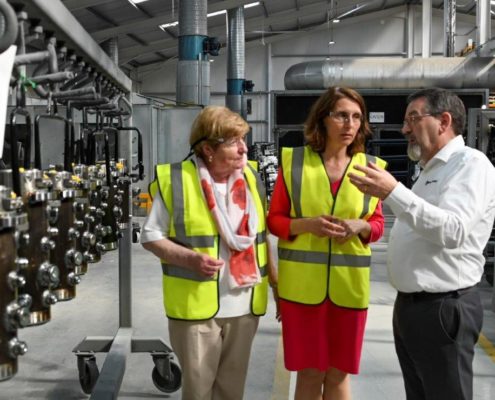 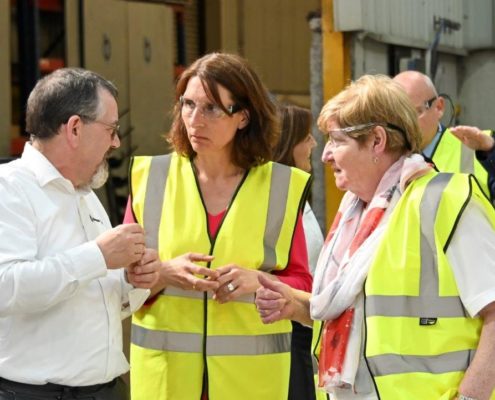 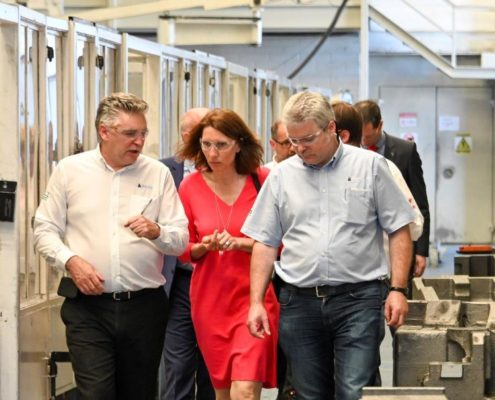 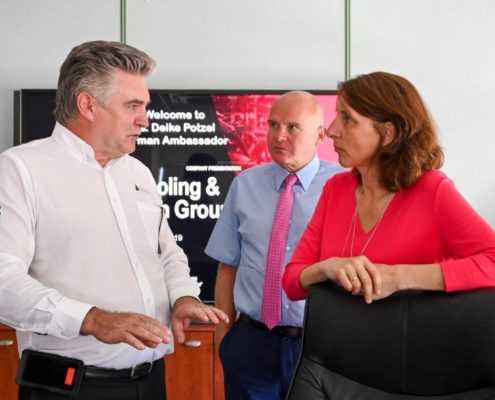 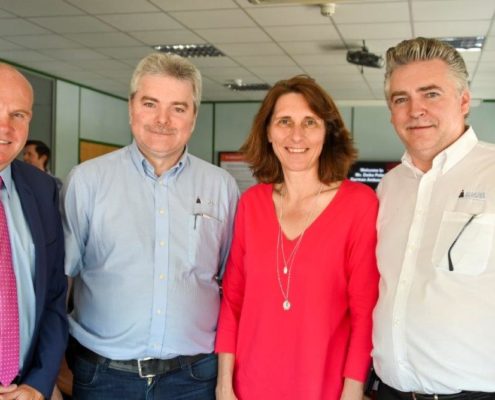 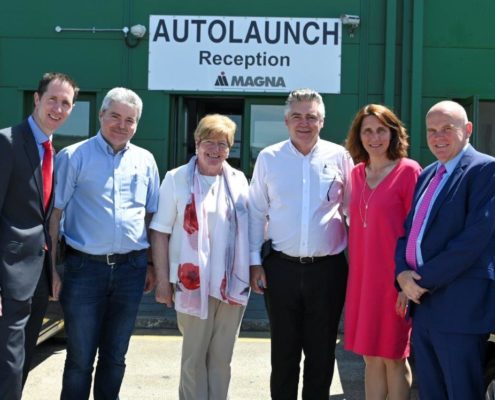 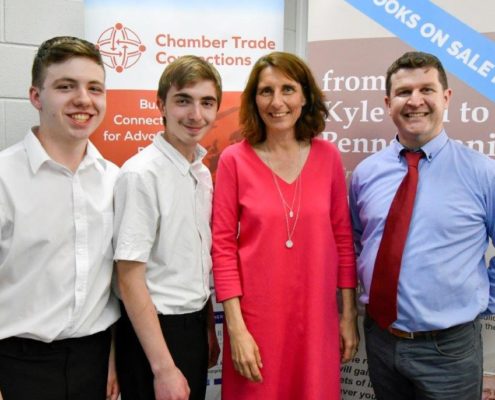 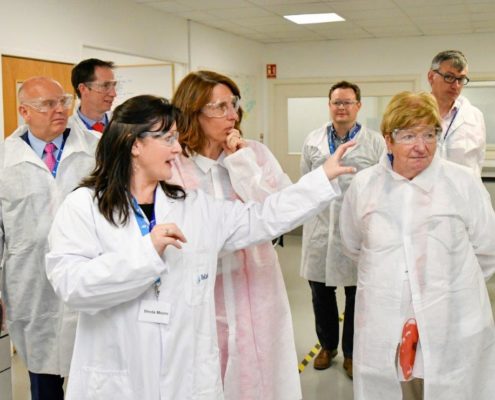 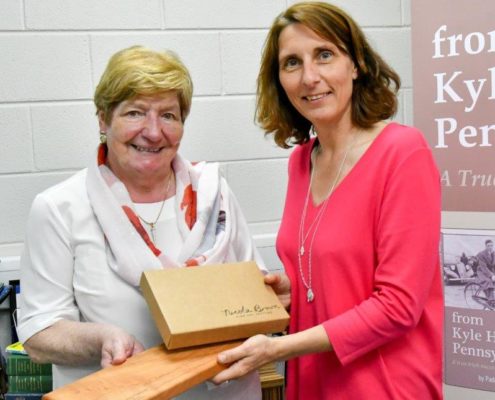 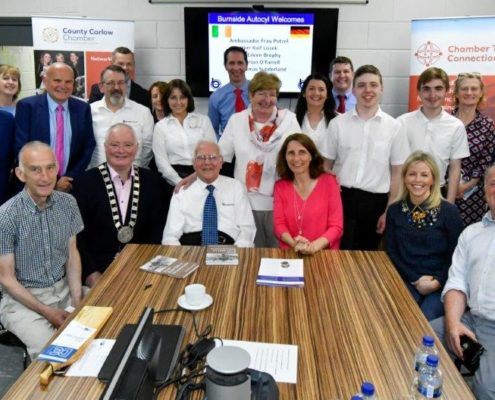 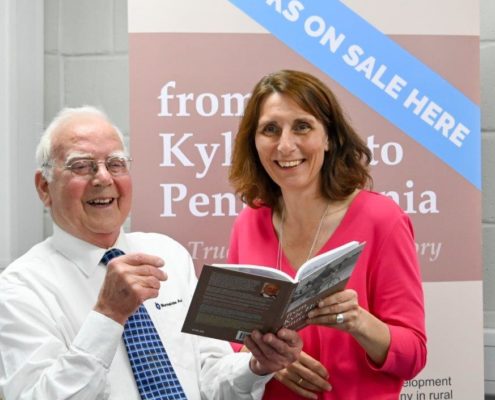 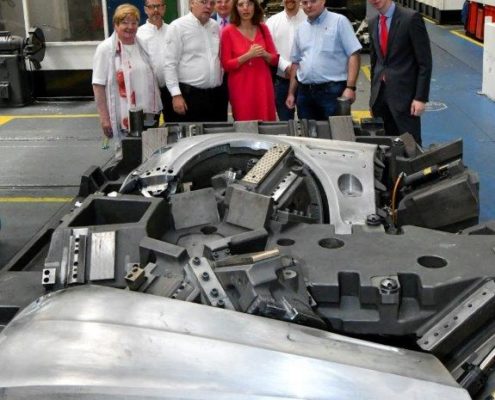 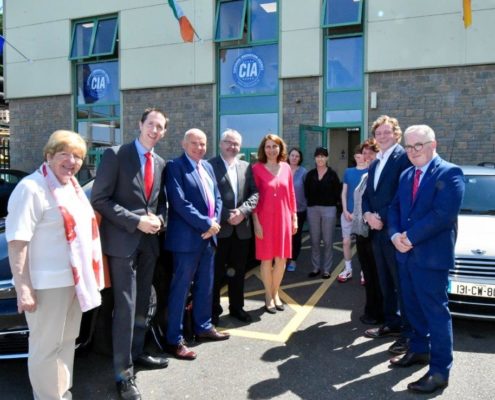 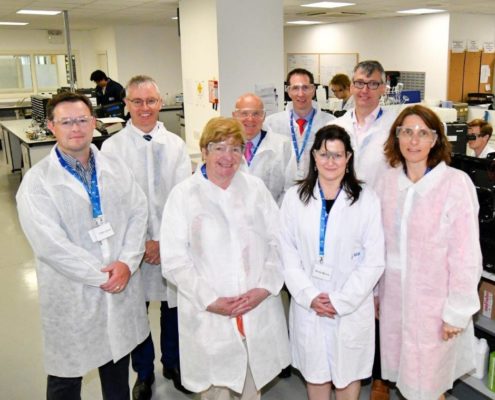 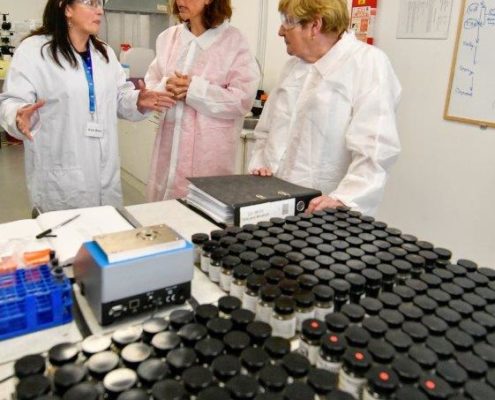 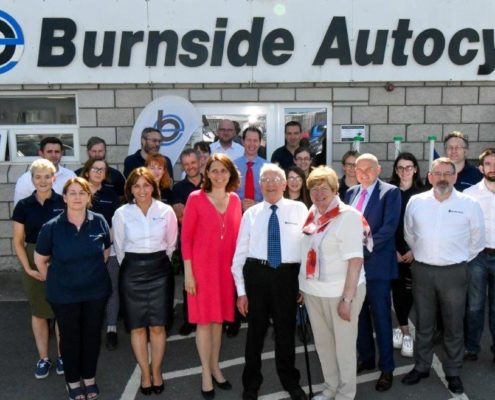 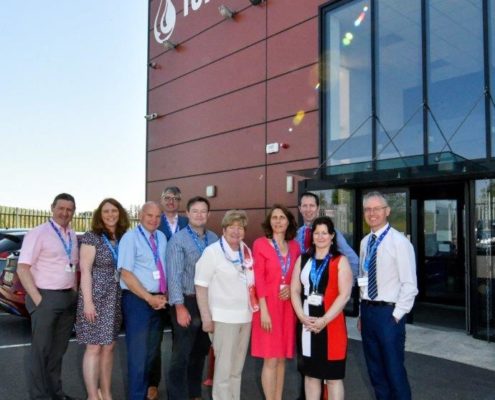 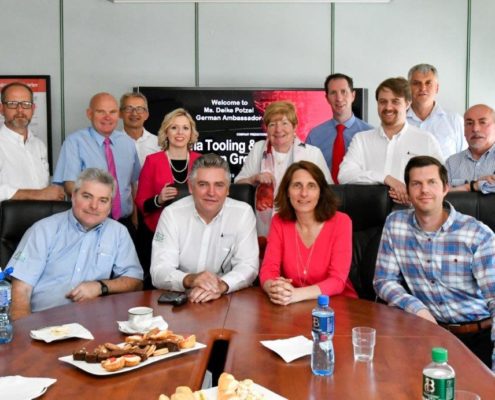 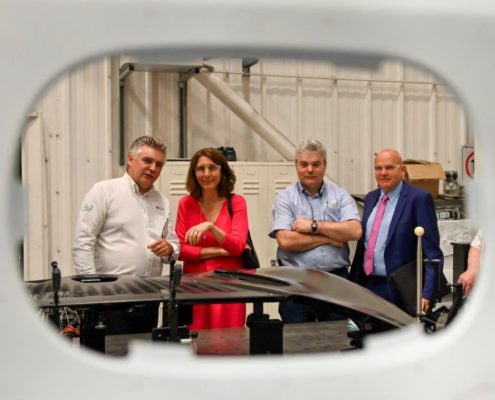 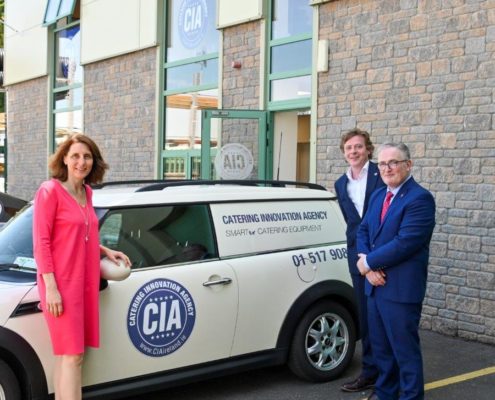 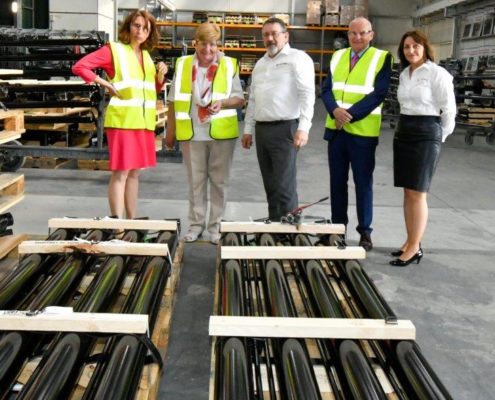