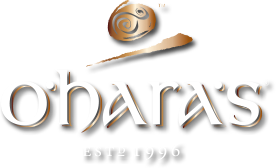 In the early 1990’s the O’Hara family, from Bagenalstown along with a few other beer-loving entrepreneurs, stepped onto the scene, ready to put Ireland on the map. Ireland’s microbreweries were born again and the wheels were set in motion for the slow but highly successful craft beer evolution. Carlow was famous for having the best arable land in the country for malt barley cultivation, land that to this day is still usedfor growing high quality malt.

The Irish Craft Beer & Cider Festival, co-founded by Seamus O’Hara, has been held in Dublin since 2011. This year 22 Irish craft breweries showcased some 150 different beers and ciders to 10,000+ attendees at the Royal Dublin Society (RDS). O’Hara’s Brewery/Carlow Brewing Company are proud to be a part of this new diversity in styles and flavours. They look forward to the opportunities this new growth has to offer.

O’Hara’s Brewery Corner, a bar dedicated to the best of local and international craft beers, opened its doors in Kilkenny city to great excitement on 19th April 2013. The pub is located approximately 20km from our own brewery on bustling Parliament Street and in an area of the city with a long association with brewing and distilling, and great bars – Brewery Corner is nestled amidst a row of 6 pubs all with their own individual personalities.

The company has won several awards, the latest been “Craft Beer Bar of the Year” for their pub “Brewery Corner.” They have also won awards at an International Level including “Championship Trophy & Double Gold Medal Winner – International Brewing Industry Awards 2000.”